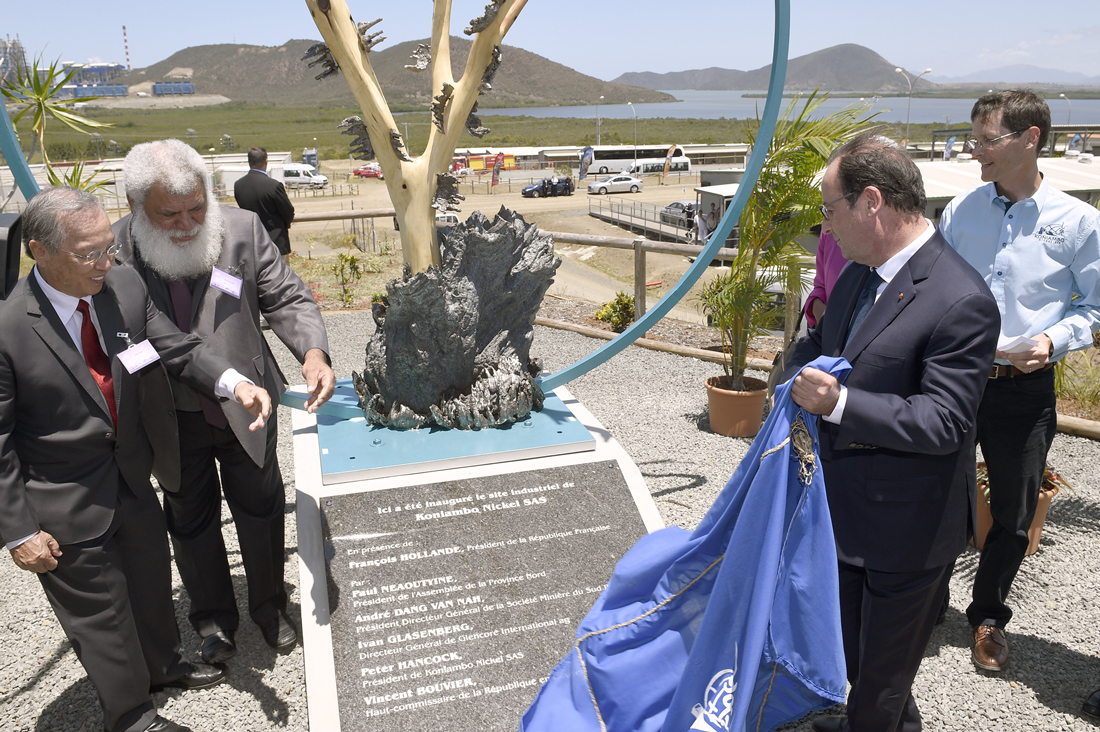 In front of more than 300 invited officials and the plant personnel, the President of the French Republic proceeded over the official inauguration of the Northern plant, recalling the commitment and support of the State to this vital industrial project and its economic re-stabilization. On this occasion, the President recalled the reasons of the State’s support for this vital project and its economic re-stabilization. “KNS is a development tool for empowerment” while describing the Northern plant as “one of the most ecological and integrated” in the world.

Paul Néaoutyine, at his turn, extended his thanks to the State for its continued support and to the customary authorities of Voh for the access to Vavouto site. He also congratulated the two development partners, particularly André Dang Van Nha and Ivan Glasenberg for this exemplary and successful partnership and the project realization, as well as KNS employees and its President, Peter Hancock. Moreover, he dedicated this inauguration “to all participants, whether they are here or not, and without exception, who contributed directly or indirectly to the achievement of this plant that has become a reality for the many future generations of New Caledonians (or citizens of New Caledonia).

For his part, André Dang Van Nha, stated that “the inauguration of this mining and metallurgical complex of the Northern plant is the result of a dream made real for all of those who joined together to obtain the necessary mineral resources for the achievement of the project”. While declaring “his great honour to have the presence of the President of France at this occasion”, he emphasized the unfailing support of the State, as the “fulfilment of an industrial success” that makes all Caledonians proud.

As for Ivan Glasenberg, he emphasized that “this inauguration marks an important step for our Caledonian operations and the country’s nickel industry. We are impatiently waiting to further pursue our well established collaborations with the community, local government and our partner for the increase in power and the attainment of the nominal capacity of 60,000 tons of nickel metal per year”.

Peter Hancock declared that “Koniambo Nickel is not just any dream!” Because it’s about producing nickel in the Northern Province with respect for the environment, and local cultures, and in favour of economic sustainable development.” He explained that “KNS was a dream that proposed more than just a single construction project” and described a realization based on “the rest for the given words, the commitment of a massif, that of Koniambo, local knowledge and capacity, commitment and support of SMSP and of its President André Dang Van Nha”. He emphasized the dedication of technical expertise and in particular, the essential financing for the construction and exploitation from successively Falconbridge, Xstrata and today Glencore, all honoured the commitment, while giving thanks to the CEO Ivan Glasenberg for his personal engagement.