New Caledonia is a French archipelago in the Pacific Ocean located near the Tropic of Capricorn about 1,500 kilometres east of Australia, 2,200 kilometres north of New Zealand and 18,000 kilometres from Metropolitan France.

International air transport: air traffic in New Caledonia goes through the international airport of Noumea – La Tontouta (located about 50 kilometres from the capital) which is used by the following airlines: Aircalin, Qantas, Air New Zealand and Air Vanuatu.
Transport from the airport: the airport is about a 30-minute drive from the town centre. Buses and taxis are available at the arrival of all flights.
Domestic transport: there is an airplane network in New Caledonia providing regular flights to the interior and the islands operated by Air Calédonie (Aircal).

Besides its role as the “French showcase” of the South Pacific and the port supplying New Caledonia, Noumea also fulfils the functions of transhipment port for services to the islands and neighbouring territories. International activities are mainly organized around the public port facilities of Noumea which namely receives cargo vessels, container ships and cruise liners – and the private ports of the Société Le Nickel (SLN), Vale Nouvelle-Calédonie, NMC, KNS, SMGM, Ets Balande whose quays are a hub for receiving shipments of nickel ore from mining sites as well as imported mineral products, and for SLN the loading site for mattes and ferronickel destined for Europe, Asia et US (via New Zealand). There is also a port for receiving hydrocarbons in the Baie des Dames (Nouméa) as well as a supply site for clinkers at the cement works of Numbo (Nouméa). KNS at Vavouto (Koné) has a routing port of hydrocarbons, coal and ferronickel. The autonomous port of Noumea comprises a large harbour with 3 docks and a total surface area of about 17,000 square metres, 1 flour mill with 5 silos whose storage
capacity is 4,000 tons, 5 grain silos with a capacity of 815 tons, 45 ha of container yards, and cold stores with a capacity of 6,000 square metres. The little harbour has a passenger terminal at the ocean liners’ quay, a passenger terminal for local passenger traffic and docks for domestic traffic. Furthermore, the port has afloat ship repairing facilities and a slip dock with a capacity of 1,000 tons.

The road network conforms to European standards. The total road network was 5,622 kilometres (in 2006). There is a public bus system and taxis are easily available. It is also possible to rent a car (it is advisable to have an international driver’s license). 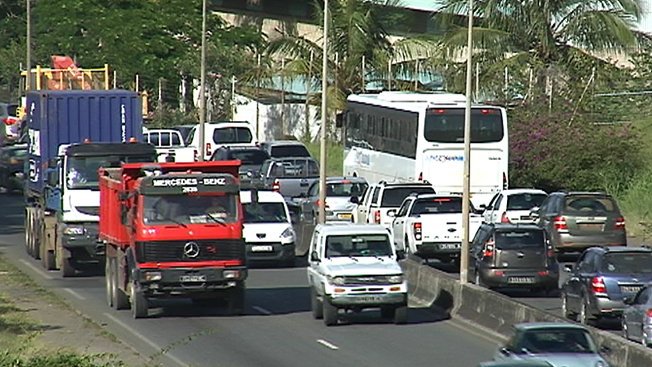