Société du Nickel de Nouvelle-Calédonie et Corée (SNNC) is the metallurgical joint venture partnership with POSCO and had 294 employees on December 31, 2020. The plant is located in the heart of Gwangyang industrial complex in South Korea. It is 51% owned by SMSP and produced each year from NMC joint venture’s mines, 54,000 tonnes of nickel metal contained in the ferronickels from the expansion of its capacity. Its production is fully sold to POSCO stainless steel mills, located in the industrial complex of Pohang in South Korea.

With more than 352 million USD devoted to the plant’s construction, the SMSP thus consolidated the France’s status as a major investor in South Korea. The SNNC pyrometallurgical Plant is among the 10 top French direct investments ever carried out in South Korea. The SMSP is thus placed in the rank the great French groups between BNP Paribas, Total, Renault, Lafarge, Rodia and Saint Gobain.
The plant was built on an industrial complex which has already all the required infrastructures such as an international port, a power station, roads and land conveyors. This made it possible to reduce significantly the capital costs.
The plant has been built in less than 30 months. Eleven months only after the first nickel tapping on October 20, 2008, the SNNC joint venture carried out successfully the full production capacity. This operation reflects the stability of the electric production of 94MW and the capacity to produce annually 30,000 tons of nickel metal contained in the ferronickels.

SMSP and POSCO signed on May 7, 2013, the agreement of ferronickel production plant expansion. A second line comprising a new dedicated nickel ore berth with a conveyor belt, a storage and ore preparation area, a second dryer, a third rotary kiln and a second electric furnace, is being built on SNNC site à Gwangyang. This second production line inaugurated on March 6, 2015, allows the plant to increase its production capacity of 24,000 additional tons, that is to say a total capacity of 54,000 tonnes per annum. In New Caledonia, NMC mines with an annual production capacity of 1.8 million tonnes of saprolite will also increase production of 3.4 million tonnes for a nickel ore grade of about 2%. 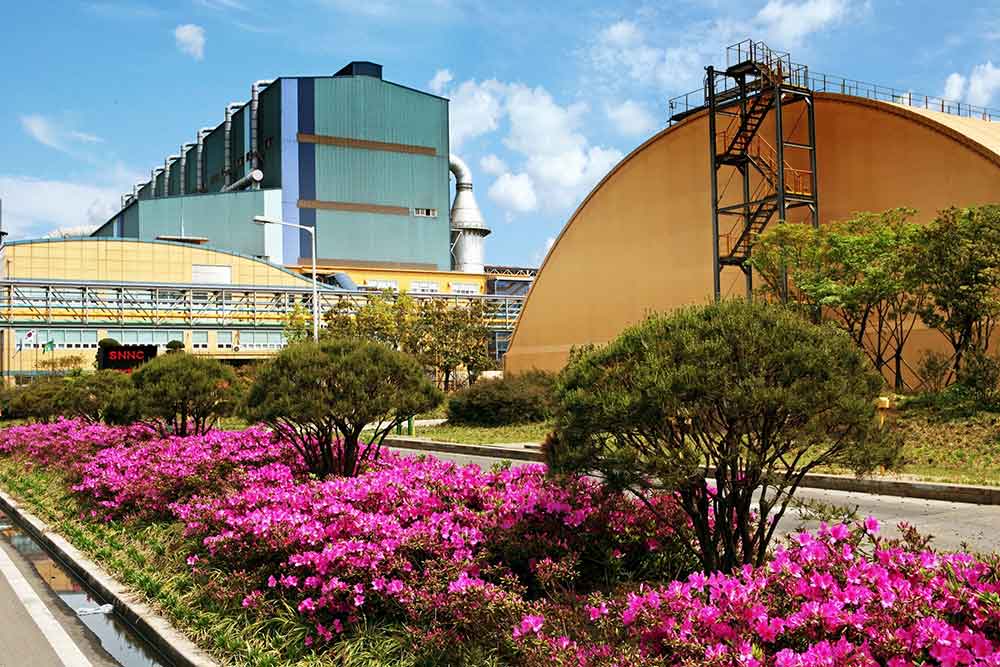 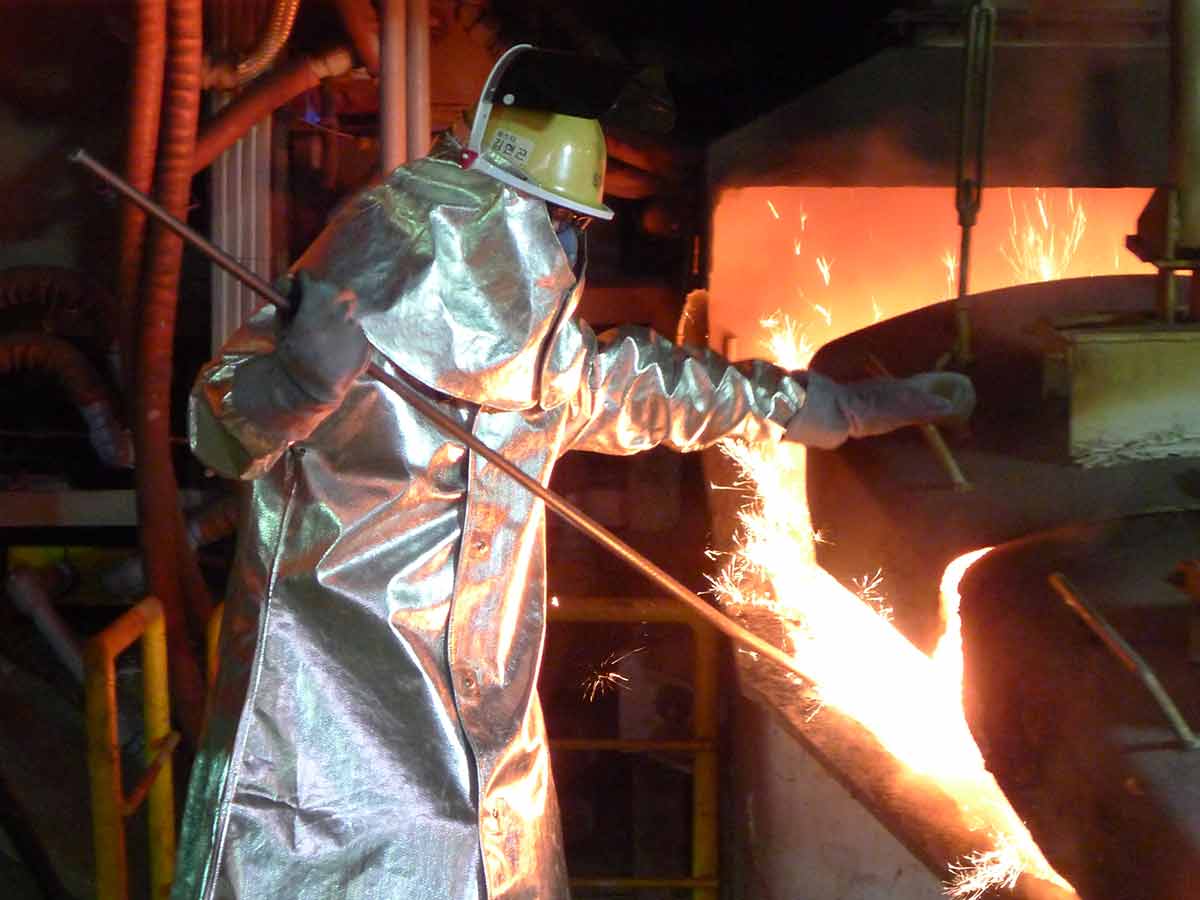 Once unloaded on the port of Gwangyang, the nickel ore is poured into coal-fired rotary furnaces at the Gwangyang Plant. Dried by the action of heat and coal combustion, it is transformed into calcined ore which is then loaded into a hermetic 94MW electric furnace maintained at very high temperature. The crude ferronickel thus obtained contains around 20% nickel and 80% iron. The electric furnace processes metal containing sulfurous impurities. The sulfur is isolated through a de-sulfurizing operation. A plant’s treatment facility encountering dust, sulfurous and nitrous gases (De-De-Sox and Nox) ensuring the site’s preservation of environmental quality. The ferronickel purified liquid is finally obtained in the form of pellet by a granulation process. Once the metal content has been extracted, ferronickel slag is isolated and recycled for use in sealing roads, building embankments and earthworks. 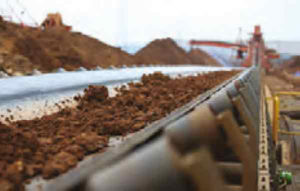 After unloaded at the port, the Ni ores are transported to the stock yard by conveyor belt and stackers. The reclaimer blends the ores from the different mines in order to maintain a homogenous raw material component. Then the rotary dryer dries out the free moisture from the nickel ore. 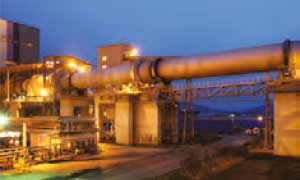 Using the coal-fired rotary kiln, the crystallized water from the ore is removed and some of nickel oxide and iron oxide is reduced by the counter current reaction. Finally the high temperature calcine is discharged. 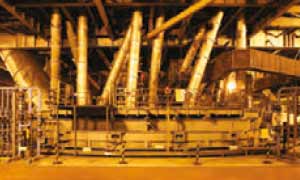 The electric furnace melts and reduces the hot calcine from the rotary kiln by slag resistance heat and electrode arc heat. Finally the molten crude metal containing the 20% nickel is extracted. During this process, the slag is produced as by-product. 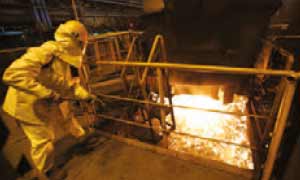 The molten crude metal from the electric furnace is refined by the de-sulfurized equipment. Finally the Fe-Ni products as granule come from casting process by shot making equipment.

SNNC practices environmental management under the notion that protecting environment is the prerequisite conditions for sustainable development of the company. Equipped with eco-friendly facilities, SNNC strives to minimize emissions of air pollutants and puts efforts for water quality control through water reuse and sewage treatment facilities.

The company is making bold investments in environmental facilities in order to minimize discharged air pollutants. First of all, the company introduced such environmentally friendly facilities as wind screen, water-sprinkling system, sealed transportation system and filter dust collectors in order to reduce discharge. In particular, its preliminary reducing furnace operates denitrifying facilities and desulfurizing facilities to which the latest clean technology was applied for the first time in the world.

The company is doing its utmost to preserve quality of water in Gwangyang Bay. Industrial water used in processes is mostly recycled and reused, and waste water generated from some processes is treated in waste water treatment facilities.

Prime Sand and Prime Stone generated in the process of production are not harmful to environment and effective recycle resources, and the entire quantity is being reused based on construction guidelines and KS. 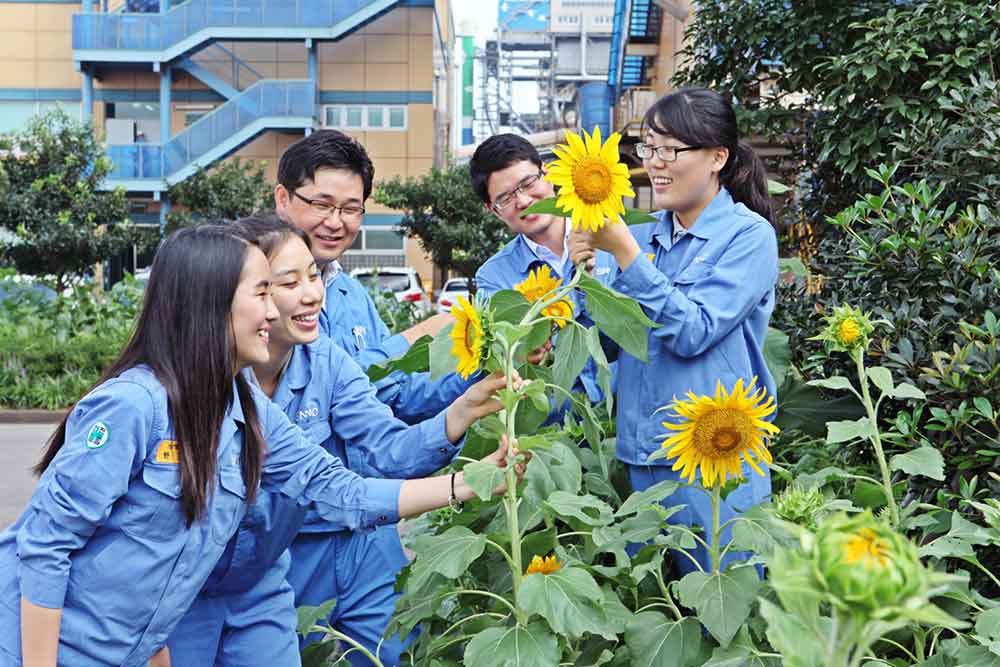 The joint venture company SNNC jointly owned by SMSP and POSCO is governed by a Board of Directors comprising six members including three SMSP’s members and three POSCO’s members.