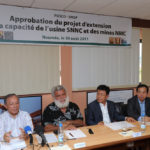 SMSP / POSCO partnership decides to proceed to the expansion of its ferronickels production capacity. The SNNC Plant, with a nominal capacity of 30,000 tons of nickel metal contained in ferronickels, will increase its capacity of 24,000 additional tons, that is to say a total capacity of 54,000 tons. A second line, comprising a new dedicated nickel ore berth, a conveyor belt, a storage and ore preparation area, a second dryer, a third rotary kiln and a second electric furnace, will be built on SNNC site at Gwangyang.

In New Caledonia, NMC mines that have reached a production capacity of 1.8 million tons of saprolite ore per year will double their production within three years. The average nickel ore grade exported to Korea, valued for the benefit of SMSP POSCO partnership, will now be approximately 2.10%. By leaning mining resource to a performing industrial unit and by optimizing it with the reduction of the nickel ore’s grade, NMC extends the lifespan of its mining assets, creating some more 600 direct and indirect jobs on the East Coast and in the North. By doing so, the SMSP group guarantees POSCO long-term access to ferronickel supplies for its stainless steel production plants.