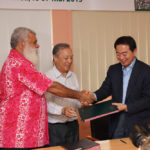 Following the validation of the technical feasibility study, the execution and financing plans, the partners SMSP and POSCO sign the agreement on the expansion of the ferronickel production unit. The production unit in Gwangyang, with an annual nominal capacity of 30,000 tons of nickel metal contained in ferronickel, will increase its capacity of 24,000 additional tons, that is to say a total capacity of 54,000 tons per annum. A second line comprising a new dedicated nickel ore berth with a conveyor belt, a storage and ore preparation area, a second dryer, a third rotary kiln and a second electric furnace, is being built on SNNC site à Gwangyang. In New Caledonia, NMC mines that have reached an annual production capacity of 1.8 million tons of saprolite ore will double production. By leaning available mining resource, made of low grade ore that cannot be locally processed, to a performing industrial unit, SMSP and POSCO optimise it and ensure jobs creation in New Caledonia. An important strategic decision for the country’s benefit.