Offered by our subsidiary in Korea, this bus shelter is the first one of the 4 equipments that will be installed in the municipalities where our other affiliate, Nickel Mining Company (NMC), operates its mining centres.

The emergence of the SMSP/POSCO partnership 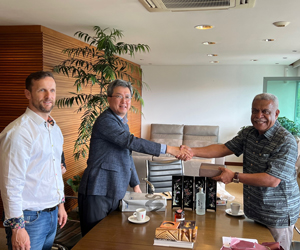 Five years after its repurchase in 1995, SMSP was one of the leading exporters of nickel ore in the world.

For the leaders of this period, it was however only one step in the development of this exhaustible local resource. They were aware of the the unsteadiness of the nickel market and the importance of optimizing the profitability of this green gold.

It is therefore necessary to extend the existing mining activity with a further industrial activity by including the processing of metal in the group’s development strategy, as this is the only operation generating any additional value out of the ore.

This lead to the creation of two joint companies, the mining company NMC and the metallurgical company SNNC, both 51% owned by SMSP and 49% by POSCO, a Korean group dedicated to steel production.

An international industrial partnership for the sustainable development of New Caledonia

In 2005, André DANG, the SMSP’s President, and Paul NEAOUTYINE, the North Province’s President, travelled to South Korea to conclude a partnership with the world’s leading steel producer at such time, the Korean POSCO Company. Three years later, in October 2008, SNNC celebrated the opening of its first production line with a capacity of 30,000 tons of ferro-nickel. In March 2015, SNNC successfully expanded its second production line to 54,000 tons of ferro-nickel.

Diversification in 2022 driven by the electric vehicle battery market trend 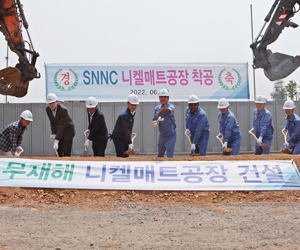 In July 2021, SMSP and its Korean partner continue to optimize the added value of the Caledonian ore and sign an agreement to spearhead the diversification of SNNC’s operations by authorizing the latter to invest in the production of nickel mattes dedicated to the manufacture of electric car batteries. The SMSP Group is thus positioning itself on this high potential market as many States are regulating and prohibiting, in the mid-term, the use of petrol driven vehicles.

The SNNC president, Jun-Hyung KIM and his collaborators are in charge of the follow-up and supervision of the construction works of this matte production unit, which started in June 2022. The construction of this facility will be completed in the second half of 2023 and the ramp-up will take place in the first half of 2024. SNNC’s ambition is to deliver 26,000 tons of ferronickel and 21,000 tons of matte annually to POSCO.

SNNC generated dividends of nearly 22 billion XPF over this period, 51% of which were allocated to SMSP.

Between 2015 and 2016, in the midst of the mining crisis, NMC was able to renew and modernize its mining infrastructure thanks to a financial investment of 17 billion XPF which was guaranteed under the SNNC agreement.

Within the framework of the joint venture agreements between SMSP and POSCO, it is foreseen that each of them appoints its representatives within the two JVs. The companies are therefore steered by management boards equally composed of 6 members appointed by each shareholder.

In 2020, on the occasion of the commemoration of the 20th anniversary of the tragic death of some SMSP managers (including the emblematic Raphael PIDJOT) in a helicopter accident, SNNC decided to get involved in the actions of the SMSP group and its subsidiaries in New Caledonia.

Thus, SNNC has made a major financial contribution to the Widjè Committee, in charge of the organization of the 28 November commemoration.

A symbolic gesture for the organization of this important day in the history of the SMSP group. 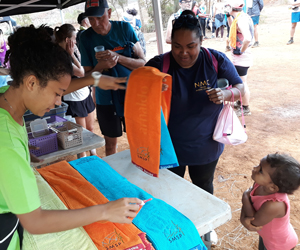 Since then, the exchanges continue and SNNC shows its willingness to share with New Caledonia additional economic benefits, which are already largely effective through the return of dividends.

Thus, SNNC, and particularly its Citizenship Department, contributes financially and socially to all the SMSP group’s events: the International Women’s Rights Day on March 8, the annual SMSP Trails, the “Orange the World” campaigns against violence against women, the Ouaco Heritage Day as well as the commemoration day on November 28.

In addition to these events, SNNC is a direct contributor through the SMSP to local events such as the VKPéenne, the Ecomobility week, the Women’s Day at the Customary Senate organized in 2022, on the occasion of which goodies were handed out. 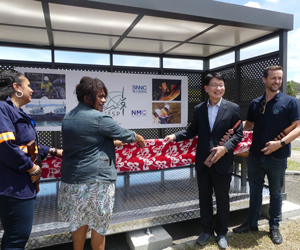 In 2022, the President of SNNC, Jun-Hyung KIM and his Vice-President Robert WAMINYA, announced their wish to donate 4 bus shelters financed by SNNC and allocated to 4 cities located in the Northern Province.

The choice of location was logically made in the townships where NMC is operating its mining activity and in Koné, the capital of the North Province, our reference shareholder.

These robust infrastructures (manufactured out of Caledonian nickel) were assembled in October 2022.

On October 6th, all the partners, SNNC, NMC and SMSP participated in the inauguration of the very first SNNC bus shelter installed in New Caledonia in the town hall of Poya.

The installations will continue in the other townships over the next few weeks to the enjoyment of the travelers and residents of these towns.

SMSP, NMC and SNNC: a partnership for the upgrading of New Caledonian ore with a number of economic impacts.