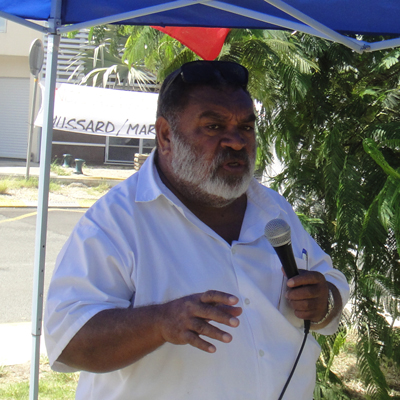 The SMSP Group was saddened to learn of the death of Mr. Louis Kotra UREGEI, founder of USTKE Trade Union in 1981.

Its Chief Executive Officer, Karl THERBY, presents, on behalf of the Board Directors, SMSP staff and its subsidiaries, his sincere condolences to his family, his clan, his tribe and his relatives, as well as to all the USTKE members of the territory, some of whom working within the SMSP Group.

SMSP General Management, with which André Dang associates himself, salutes and honors the man of conviction that he was and wishes to pay him tribute for the battle for the respect of human values, against inequalities and in favour of the protection of workers that he led continuously during decades.

Under the impulse of its founder, USTKE Trade Union did not hesitate to be mobilized for the SMSP’s Development and supported SMSP in order to make the Northern Plant Project a reality in the Northern Province.

SMSP would not be the company it is today without him. SMSP hence pays him tribute.

Louis Kotra UREGEI, may your soul rest in peace!