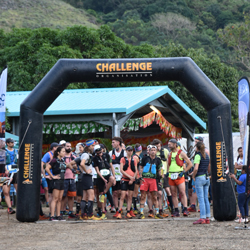 “A roller coaster” is how Tatiana SAINT-POL, HS Technician from NMC POYA, described the preparation until the very last minutes of this third edition of the SMSP Trail 2022 in the municipality of Poya at Nekliaï tribe.

Organizing such an event is always a challenge. Align all the players, define a program, ensure the proper execution of all the actions, from cleaning to mobilization of the stakeholders and stalls etc.

And yet, for the pleasure of the riders, the tribe and the organizers, the SMSP Trail 2022 was held successfully this Saturday, August 6. 236 participants, and about 130 visitors have joined the site of the Nekliaï tribe’s common house.

The technicity of the tracks has now become the trademark of SMSP Trail event but also the welcoming atmosphere. 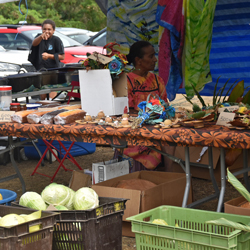 The setting up of stalls and the fragrances of various foods embraced the village of Trail like Amédé and its artisanal coffee stall. Patrick LELEIVAI of Power 2000 ensured the sound animation and the Association Omnisport of Népoui, (AON) of Karl JOHNSTON was in charge of child care.

The group’s subsidiaries, NMC and Koniambo Nickel, offered workshops and games on their stalls, allowing young and old participants to win prizes such as backpacks, glasses, gourds, etc. Sarah GUERBER-CAHUZAC and Lorna WABEALO of Koniambo Nickel, the event’s privileged partner, even drew lots to allow the participants of the plantation to win prizes. Tatiana SAINT-POL, Seyrane BELIOT and Alexis VASSEUR provided an NMC game called “Chemin minier” to discover the NMC operations. 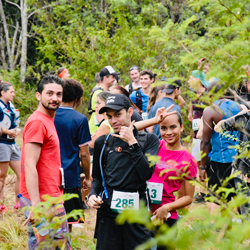 The mountains of Nekliaï offered themselves to the runners in pain and effort, to say the least. Whether walking or running, they all shared the difficulty of the slopes, with a difference in height of 650m on the so-called 10km race (actually 11.5km) and the 30km race (actually 33km). However, little abandonment in the end and a ranking with the current big names on these sporting events such as Leslie NOWICKI or Ronan POULIQUEN who have each seized the first place of their category, respectively on the 30km and the 10km.

The races delayed a little in order to finalize the setting up of the checkpoints. Both races 10km and 30km started at 7:15 and 7:40am without a hitch. The plantation race started at 9:00am with 84 participants on a site right next to the NMC Seaside (where the ore is loaded).

The only drawback in the schedule was the cancelation of the three planned mine visits due to the light rain which made the travel of buses on mine far too risky. 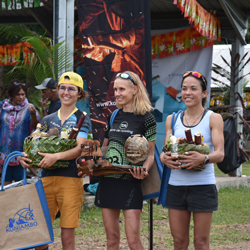 The day ended with the award ceremony at around 2:00pm to reward both the athletic performance and the presence of the riders. A draw was organized for the participants of the plantation race to offer them a dozen lots.

The awards delighted the participants, especially for the first prizes sculptures by Angèle WAYARIDRI, which were a real discovery, lamps as well as works of art. The baskets filled made by the Poya Market Association, were particularly supplied containing fruits, vegetables and even bottles of syrups and jams. 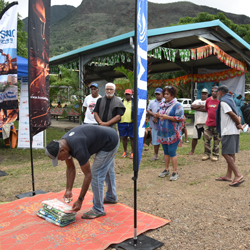 Finally, a custom of closing, the return of the opening customary of the day before, followed the award ceremony. On this occasion, the mayor, Evelyne GOROATU, the President of the Clan Chiefs’s Council, André HONKO, the President of the Mwéù-Kradji District and Maxime NEKIRIAI addressed a few words both to the SMSP group and its subsidiaries, NMC, Koniambo Nickel, SNNC and Cotransmine, but also to the runners to thank for making this day a success. “You, the runners had brought something different today into the tribe,” said Maxime NEKIRIAI, while André HONKO pointed out the beneficial atmosphere this event allowed within the tribe.

SMSP wishes to express its sincere thanks to: