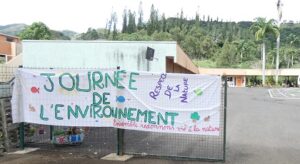 On Friday, July 22nd, 2022, the Kouaoua City Council held the second edition of its Environment Day event with several partners including the CIE (Center for Environmental Initiation), EnviroNord Association, the Ho-Üt Association, the Kidam Association but also the mining operators of the area. Thus, NMC, Cotransmine and Koniambo nickel gathered to join the event in coordination with their shareholder, SMSP.

Cohesion, warmth, sharing, commitment and environment are a few words that can sum up this Kouaoua Environment Day. Ludmilla VIRIAMU, in charge of animation at the Kouaoua City Hall, was thanked several times for the accurate organization set up which allowed the partners to share their know-how and creativity with pedagogy to children from kindergarten, elementary and secondary school.

Nearly 200 children from Kouaoua and Canala, invited for the occasion, were able to enjoy the workshops both at school building, mangrove and mining site. 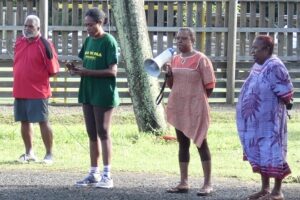 All participants and children arrived on the elementary school site of Faja (Kouaoua) from 6:00 a.m. to set up classrooms and tents in front of the school. At 8:30 a.m., everyone was invited to gather in front of school for the opening speeches. The representatives of the City Hall, the Faja Elementary School and the Kouaoua and Canala’s Secondary schools gave speeches, highlighting the importance of the environment and its fundamental place in the present and the future of everyone. Two brave elementary school students shared environmental poems with confidence. Participants and children were then invited to enjoy an American-style breakfast offered by Kouaoua City Hall.

The NMC, Cotransmine and Koniambo Nickel team arrived on-site around 7:00 a.m. to set up and identify the locations and their colleagues of the day. A great opportunity for everyone to share with the other partners invited. Bringing togetehr know-how and the mobilization of existing and active actors are of no question regarding environmental actions, as reminded by the talks with the Association Ho-Üt, CIE and Environord members.

Clarisse KAPARIN and her team welcomed and guided the children on their arrival at Sotramine site where the plantation was located. 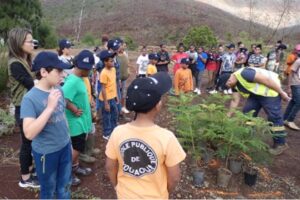 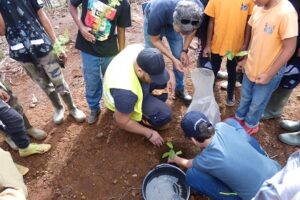 Jonathan GONYled a safety quarter-hour, then a presentation of the species that were going to be planted, highlighting that Caledonia had 14 endemic species among the 20 species of arraucaria existing in the world. Then, with the children, he explained the steps for planting, the drilling having already been done by NMC’s usual partner, SIRAS.

From explanation to practice, children of 9th and 10th grade, and of elementary school (4th & 5th grade) did not wait long before grabbing the plants and getting into action. The supervisors themselves, Brandon, Ophélie (elementary school teacher) and Clarisse, as well as our driver, Nico, participated with enthusiasm and professionalism to ensure the safety and smooth running of the workshop.

A mangrove seedling planting workshop was also planned for the same group brought to Mine. However, for reasons of time, it was not possible to lead it. The Head of Cotransmine, Donald BEMARON, had prepared a dedicated area for planting. This is only a matter of time for him and SMSP who will continue its commitment alongside the City Hall and the Elementary School. The Director of the Elementary School, Julianna PONGA, has been working with her teaching team for some time now to launch activities related to environment. Thus, the children maintain an homemade seedling nursery and regularly carry out replanting activities, with complete autonomy. As such, a group went to the mangrove in the morning to follow-up with their plantation from previous workshop.

In parallel with the NMC-Koniambo nickel workshop, the other partners present and the teachers themselves held workshops on various topics within the Faja school and under the tents outside.

The Association of KIDAMS on the theme of the “Eco-Citizen Brigade” enchanted the youngest under the premise of the school.

The SVT teacher from Kouaoua College provided a Microscope workshop, an opportunity to discover the perspective of the infinitely small environment.

The Association Ho-Üt de Touho with its three members, Stéphane, Didier and Amaury, explained the process of plastic waste circulation, especially into the sea. The children could see the power of the ocean in that it always throws onto the beaches, our beaches, all that is carelessly thrown overboard.

The morning of the workshop ended with a shared meal offered by the City Hall, the taste buds of the participants were served, to say the least.

The event was a success for SMSP Group and its subsidiaries, NMC, Cotransmine and Koniambo Nickel. We want to thank Koniambo Nickel for coming from far away to participate and for the goodies including Koniambo Nickel caps that the children wore the whole day after thhe workshop.

Also, SMSP Group would like to thank dearly Kouaoua City Hall and its team, and the schools who organized this event and allowed us to contribute.