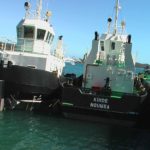 Cotransmine the SMSP Shipping Company has been delivered two new tug boats intended for Kouaoua and Nakéty operating centers. Currently both centers perform loading operations with two tug boats, i.e. Claude II and Pierre Edouard and 5 barges including 3 leased to a North Province shipping company. The new tugs are named after Bogota and Kinde, e.i. to say two passes to reach Kouaoua Nakety bays. Their construction was supervised by Veritas Bureau and New Caledonian Maritime Affairs. Brand new and freshly delivered at Numbo Bay, the two boats are 16 meters long and 6.20 meters wide, and are equipped with bounds designed for trailing of barges during the ore transportation to mineral vessels. Unlike previous tug boats, these include a fitted out kitchen, captain’s cabin with a bed and a private space for sailors, equipped with two bunk beds, all rooms fully air-conditioned. The Human Resources Department is presently screening various applications in order to recruit and appoint two new captains. Bogota and Kinde will be put on operations mid-December 2015. As for the old tug boats, Claude II and Pierre Edouard, after sailing and braving the floods and the East Winds, between Kouaoua and Nakéty waters for over 40 years, they will be sailing for an ultimate no return journey towards their final destination, the Numbo Bay’s repository.