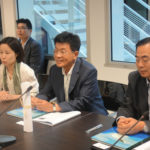 On 19th September, SNNC signed a MOU (Memorandum Of Understanding) for the capacity expansion project with the Governor of the Jeollanam-do Province, the Lord Mayor of the Gwangyang-city and with the Gwangyang Bay Area Free Economic Zone Commissioner With this MOU, SNNC will increase its annual nickel production capacity from 30,000 tons to 54,000 tons while the local governments provide the needed administrative support. Accordingly, SNNC will start laying the groundwork in Gwangyang with plans to complete the second nickel refining facility in 2014.

In the meeting that preceded the signing MOU, CEO Sang-Hong Lee mentioned that, “the great accomplishments of SNNC are not only due to company’s efforts but also cooperation of local governments and citizen. SNNC will continue to do its best to become the “best-loved company” through communication with local community and related companies.”