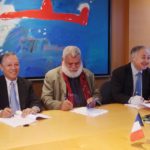 Considering the project’s magnitude and thanks to the guarantee of the Northern Province, the French Development Agency (Agence Française de Développement – AFD) is actively engaged in the construction of the Northern Plant by participating to its financing. A loan amounting to 170 million euros, that is to say more than 20 billion XPF, was awarded to SMSP. The credit agreement was signed in Paris, at AFD headquarters in the presence of Paul Néaoutyine the Northern Province President and André Dang the SMSP’s President and CEO. It is the largest loan ever granted by the AFD to a French overseas territory.