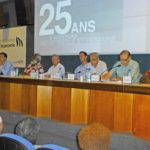 SMSP has organized along with the New Caledonian Chamber of Commerce and Industry, the Economic Rendezvous Event which was held on June 4, 2015, at the Noumea CCI Conference Room. During this forum, André Dang Van Nha and his team have presented various headlines including the company’s history, its long term industrial strategy, the development of financing structures set up for the construction of two metallurgical plants, and the review – after 6 years operation – of the Caledonian Plant’s in Korea and the future prospects of its second production line. The SMSP special feature Economic Rendezvous also broke the record of attendance since around 200 guests gathered compare to the 180 planned seats.