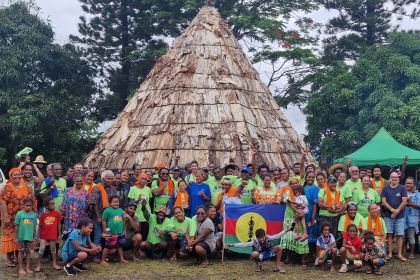 In 2020, the Kouergoa 28 November Association and SMSP and subsidiaries: KNS, NMC, Cotransmine and SNNC, brought together into the Widjè Committee, born from this occasion, marked 20 years of commemoration since the tragic helicopter crash of 28 November 2000. If to be reminded, 7 persons lost their lives in this accident including 6 members of SMSP Direction and the CEO: Raphaël PIDJOT CEO, Jean-Pierre LAPOUS Managing Director, Jean-Pierre GASTALDI Technical Director, Régis VIVIER Financial Director, Jean-Marc DALMASSO SMSP pilot; Pierre THOLLOT and Robert GARDINER two consultants of the Canadian Falconbridge Group. In 2021, the COVID conditions did not allow the organization of a large-scale gathering. A restricted group went to the Memorial Hut built on the site of the crash in order to pay their respect.

On this Monday, 28 November 2022, it is therefore with a sense of relief that the 28th November Kouergoa Association along with the Widjè Committee successfully welcomed the employees of the SMSP subsidiaries, the visitors and the inhabitants of the area who went on a pilgrimage to the hut.

Customs and launching of 2022 activities

According to the established schedule, the welcome custom’s ceremony was lead by SMSP and its Chief Executive Officer (CEO), Karl THERBY. 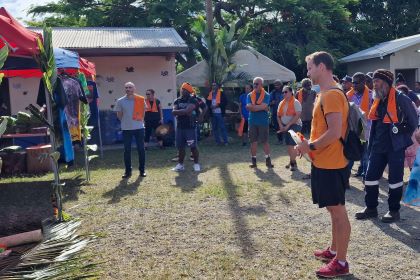 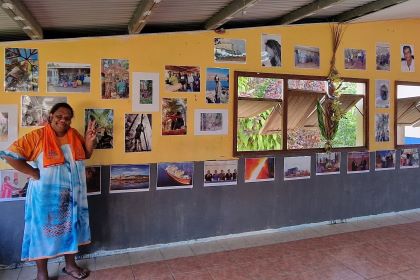 A reminder of the history of this commemoration and of this gathering was also given on this occasion on the basis of the historical exhibition set up in the courtyard. A piece of wall for a piece of history.

It is in this same courtyard that all the participants in the Day were able to share a meal prepared together in the morning.

Ascension to the Memorial Recollection Hu

The weather, particularly heavy and hot, did not discourage the employees of the 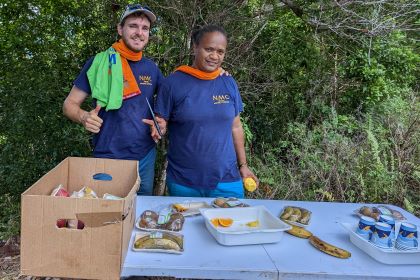 SMSP subsidiaries such as NMC, Cotransmine and KNS, and their families, but also the population of the tribe, to carry out the hour and a half of intense, particularly steep walk towards the crash site. It is not a question of running a race, but of performing this pilgrimage walk with serenity and conviviality. It was an opportunity for the teams from the different NMC, KNS, Cotransmine and Nouméa sites to meet or reunite on the path and in a similar identical effort.

The footpath to get there was cleared by volunteers from the Widjè Committee and members of the 28 November Kouergoa Association. This was an arduous task over steep ridges, and very uneven ground, to make sure all participants could move safely at their own pace towards the crash site.

Checkpoints were set up along the way to allow participants to regain their strength offering: pineapples, dried coconuts and other fruits were offered by the volunteers.

The bravest and most athletic volunteers ensured that the checkpoints were supplied with 20L water bottles on foot.

Kaori seedlings and other endemic species to the area were made available at the crash site and along the route to allow participants to help plant trees that will provide valuable shade for future years.

The welcome at the Kouergoa Tribe 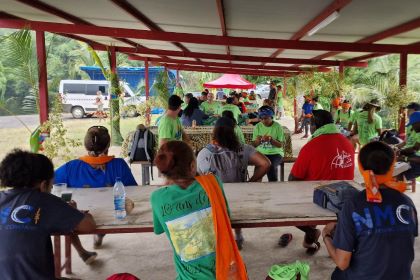 The participants gradually came back to the main place of the tribe, and starting point of this walk, between 10 am and 1pm in a warm atmosphere, and for some with the relief of being able to rest their legs. They enjoyed the stalls selling flowers, woodcarvings, homemade jams, homemade juices, etc. set up in the square of the Maison Commune.

At the end of the morning, the rain, at first hesitant, invited itself more apparently on the site. The dishes prepared by the tribe, supported by employees of SMSP branches, in particular Cotransmine, which was particularly active in the kitchen alongside the tribe’s cooks for the occasion, were made available in the courtyard, in the dry. 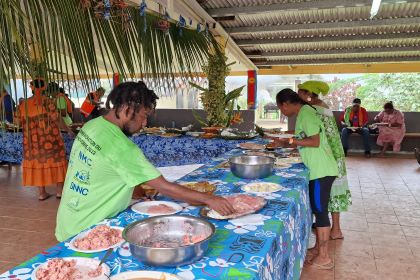 Fred’s humble speech was a profound and solemn reminder of the reasons and importance of meeting in these special conditions, far from hierarchies and operational imperatives for one single day.  It was a way to realign ourselves with the symbols that lead us every day to carry out our respective missions within the subsidiaries of the SMSP Group.

As usual, the meal was copious, tasty and varied with a baked pig, bami, salads among others, root-crops, poingo bananas etc., a well-deserved reward after the sportive walk at the beginning of the day.

Thanks and farewell ceremonies 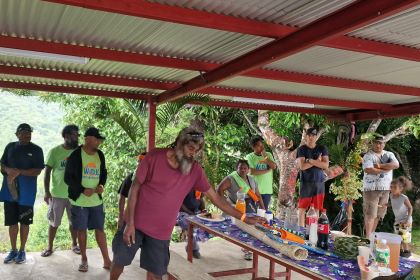 The closing ceremonies were performed by NMC and Cotransmine at about 3pm. The closing speeches were particularly eloquent.

Marcellis PECOEAOA of NMC Kouaoua began by thanking the work accomplished as well as all those who came. This was an opportunity to thank the group and the management of the subsidiaries for allowing staff members to meet every 28 November outside of work for a time of recollection and commemoration.

Edouard IKAPA of the NMC then expressed particular appreciation for the great deal of preparatory work done this year.

Finally, Gaston EKEDIWO of Cotransmine Numbo, continued the speech to thank also the active forces who were there as well as the company’s presidents and leaders present. Words of appreciation to the populations of the tribe for their great contribution, in particular the reception and welcome of the volunteers throughout the year during meetings and works carried out directly on the tribe.

The old Harry BEINON who performed the exchange on behalf of NMC Nakéty to the tribe of Kouergoa underlined with malice and a positive anticipation “it is a sign of goodbye, we will see each other next year”.

This was a way of consolidating the link forged over 20 years ago. He added to the thanks already expressed to the volunteers by noting with emotion that over the years he has seen improvements and developments in the right direction. He was keen to congratulate the work carried out for the Memorial Hut by the tribe and all the active forces. He enthusiastically gave everyone rendez-vous for next year!

The meaning of the date 28 November 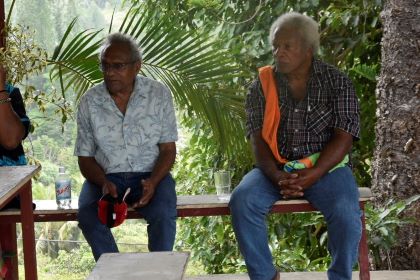 November 28th is a date that belongs to the intimate history of the SMSP Group, its employees, its subsidiaries and also of New Caledonia. When the tragedy occurred in 2000,  SMSP development and growth, its rise as an economic player of the Northern Province and of the territory were closely linked to the peace signed during the Matignon Agreement.

Roger THEVEDIN, Customary Chief of Kouergoa and member of the Council of Chiefs of the Xârâcùù Area, thus highlighted “On November 28, 2000, the land of Kouergoa Tribe welcomed the last breaths of SMSP’s staff members, Raphaël PIDJOT CEO, Jean-Pierre LAPOUS General Manager, Jean-Pierre GASTALDI Technical Manager, Régis VIVIER Financial Manager, Jean-Marc DALMASSO SMSP Pilot; Pierre THOLLOT and Robert GARDINER consultants of the Canadian Falconbridge Group. This is an integral part of the tribe’s history, as well as the SMSP’s and the whole New Caledonia’s. Raphaël gave his life for the Kanaks. Kouergoa will never forget this”. 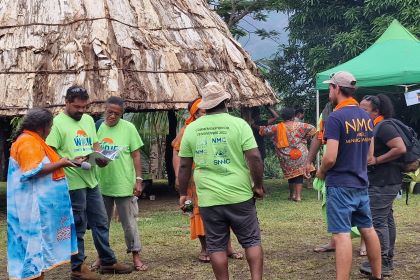 Created in 2020, on the occasion of the 20th anniversary of the group, the Widjè Committee is the expression of a commitment that has lasted for more than 20 years now from the employees of NMC, Koniambo Nickel and Cotransmine, subsidiaries of the SMSP group.

The volunteers of the subsidiaries met each year to ensure, alongside the Association 28 November of the tribe of Kouergoa, the maintenance, and the enhencamenet of the crash site. A way to honor the people who lost life there, and also a mean to share the history with visitors every year.

Once again this year, it is important to highlight the hard work achieved by the members of the Committee including those who left or couldn’t be with us on the 28th:

Alphonse WENENINA, he excused himself this year because of personal commitment after 7 years devoted to work on all works done around the crash site and in the tribe. We thank him and will welcome him back anytime.

Ludmilla TAAVIRI et Eloïse MEUREUREU-GOIN, have joined the Committee this year. Cotransmine employees, we are delighted to welcome them among us.

Teddy WAYA, from NMC, also joins the committee this year.