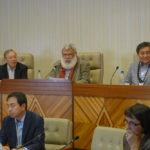 First visit for Kim Joonsik, Senior Executive Vice President of POSCO, in charge of the stainless steel division. The same elected Members of the Northern Province who visited Korea in June, welcomed the delegation to the traditional hut. The delegation was then invited to sit in the premises of the Assembly in order to discover the Northern Province in its operation as well as its geography, demography or economy. Finally, the delegation has visited the Ouazanghou mine.