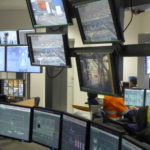 The construction works of the Northern Plant’s first production line are now completed. Series of tests are underway to monitor the support services and experiment the operational infrastructure. The first melting furnace is expected to enter into production the next year, and consequently the first metal production line during January or February 2013.

The second production line is expected to be completed and delivered during 2013’s second quarter. The Northern Plant’s production will rump up to gradually reach a steady annual rate of 60,000 tons of nickel contained in ferronickel in two years period, that is to say by the end of 2014.