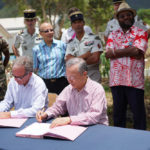 An agreement between the State, represented by High Commissioner Albert Dupuy, assisted by Colonel Patrice Bellon, Commander of Adapted Military Service Regiment (RSMA) and NMC, represented by its President, André Dang Van Nha, has been signed on January 23, 2013 at Koné. This convention provides for the training of potential drivers of mining equipment, intended for 30 students, among which 14 youth from Poya and Kouaoua, identified by NMC. Under the provisions of this agreement, the State supports the full training costs while NMC is committed to hire the trainees who successfully completed their training.