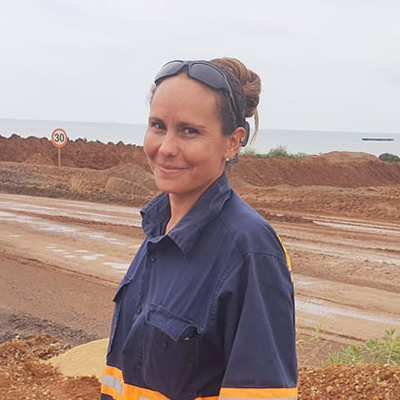 I am proud to be in my current position as well as my evolution. I still hope to show my worth and continue to grow within the company.

At the NMC site in Ouaco, the laboratory is located on the seashore, and the latter constitutes a working area on its own as well. Aurélie BOSCIA is in charge of those 2 units as Laboratory and Seaside Manager for the NMC in the center of Ouaco (North Province, West Coast, New Caledonia).

From support services to operations: a successful step for Aurélie!

A woman of character, this is the adjective that best defines Aurelie when meeting with her at first. The handshake is frank and she go around on her work area, greeting each of her colleagues by name, and yet she has only been in this position for 6 months.

Aurélie, just 30 years old, always knew she would work in the Mine. She went to secondary school in Koumac, before entering Michel Rocard High School in Pouembout. Living in Ouaco, she would pass every day by the North Plant, koniambo Nickel, while building up was on-going. And for her, it’s no question, she’ll participate to this project.

Interested and convinced by the environmental professions, she obtained a Bachelor of Science and Earth Life (SVT) degree at the University of New Caledonia in 2012. A little uncertain about what to do next, she gave herself time and applied to Koniambo Nickel where she was hired for a 6-month fixed term contract as an Environmental Planning Technician. When she leaves, she knows that she wants to work in the environment, but in a global way, in management and piloting.

As such, in August 2013, she left for France to join the University of La Rochelle (IAE) to achieve a Master’s degree in environmental management.

After graduation, she finally returned to the territory in 2015 and joined Koniambo Nickel as a Risk Engineer. And she joined the NMC in October 2017.

You are still at the beginning of your career but you’ve experienced so many changes already?

“It is true, but it was necessary. When I went to France to study, it was already a change. If you can, you have to go and see somewhere else. It brings us a lot.

And then, after two years at Koniambo Nickel, I needed to test myself, get out of my comfort zone.

At NMC, I was first recruited as Head of Environment West Coast, and after 3 years between the Centers of Poya and Ouaco, I was offered my current position as Head of Laboratory and Seaside.

For me it’s symbolic, I’ve gone from ‘Supports’ to ‘Operations’.

In this position, these are technical, human and personal challenges. I now have 23 people in my teams including the two Managers, Laboratory and Loading. They are responsibilities but also the possibility of doing concrete things every day that allow us to improve the working conditions of the teams in order to achieve our results in terms of safety, environment and production.” 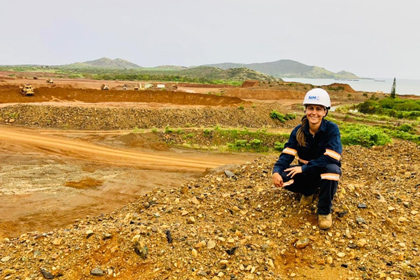 Women, men, the question should not be asked. It is respect and humility that matter.